The Gallagher 90th anniversary year of employees volunteering their time for a charitable cause with a goal of 90,000 hours has ended – and the company achieved 112,706 employee hours in total. 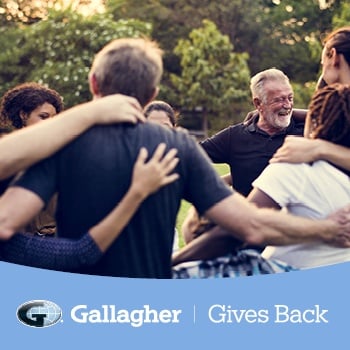 All around the world we responded to extreme weather events, such as the hurricane in Dominica and the drought in Australia, helped build a Habitat for Humanity house in Atlanta in the United States and to raise the walls of an English language school in Cambodia, assisted with the staging of fundraisers for cancer research and other health causes, and rolled our sleeves up and got involved with working bees, cooking up a storm, running, walking and riding for a cause, and packing donations.

President, Chief Executive and Chairman of the Board Pat Gallagher, together with Corporate Vice President, Ethics and Sustainability Tom Tropp, extends his thanks to every Gallagher employee who took part in the effort.

“When my grandfather started this business he may not have known we’d make it to 90 years,” Pat says. “What I can tell you with certainty, though, is that he’d be proud to see the company that shares his name act with such integrity and show such compassion to our communities.

“I can think of no better way to honour him or to honour 90 years in business.”

Gallagher expressed proud thanks to employees across 34 countries and celebrated the global volunteering achievements for many causes and local communities.

In Australia some of our favourite stories involve animals: koala conservation in Queensland, guide dog training in Sydney and pets joining their owners in RSPCA fundraising efforts.

Others tugged at our heartstrings: providing basics for children in the emergency system, helping provide babycare items for families in need and raising funds for suicide prevention.

Some other initiatives supporting good causes involved a certain amount of courage – and schadenfreude. One of the biggest highlights was the Ice Bucket Challenge. Melbourne threw down the gauntlet and introduced the costume concept, inspiring the Sydney executives to come to the party.

At the grassroots level many branches enjoyed home-baked treats for morning tea fundraisers and, of course, we also have a bunch of Gallagher stalwarts who work tirelessly, year after year, to contribute to important causes like Movember, including Chief Executive Sarah Lyons’s commitment to participating in Tough Mudder.

“This year we have an even bigger Tough Mudder team braving the elements to raise important funds for charity, which speaks volumes about our active community presence and desire to make a visible difference. Having a social conscience is part of the Gallagher Way – we should want to help, and that’s what we’re here for both professionally and personally,” Sarah says.

“I would like to thank everybody for their efforts this year, including those who went above and beyond to contribute towards achieving an outstanding international result. It’s terrific to see the team pulling together and ‘giving back’ as part of our ‘blueprint for better’ culture.”

Click here to read the Gallagher corporate responsibility mission statement and review some of the global activities we have supported.

The Gallagher Way in action